Nicknamed the "Capital of Latin America" and known for its Cuban-influenced cuisine and culture, Miami is a destination with lots to offer. Mention the city and it conjures up images of long, white beaches, palm trees and blue skies. Whether it's for a romantic getaway, a family vacation or time with friends, there are plenty of exciting attractions in Miami. The city is a real melting pot, combining finance and culture in equal measure. Located between the Florida Everglades and Biscayne Bay, Miami is certainly not lacking for beautiful scenery. All that is topped off by a climate that is warm all year round – as if you needed another reason to book flights to Miami! Discover here the best offers for Flight + Hotel to Miami.

Miami has so much to offer. The list of Miami attractions is seemingly endless, taking in A-list nightspots, fabulous restaurants, eclectic shops and pristine beaches. Visitors will, of course, want to dive into the Latin American-influenced local culture, discovering Latin dance music, food and more. It's also the ideal city for foodies. While Cuban sandwiches are possibly Miami's most famous culinary export, there is far more to discover and enjoy. The wide range of options means that there is something to suit any pace of life.

Just some of Miami's highlights include: 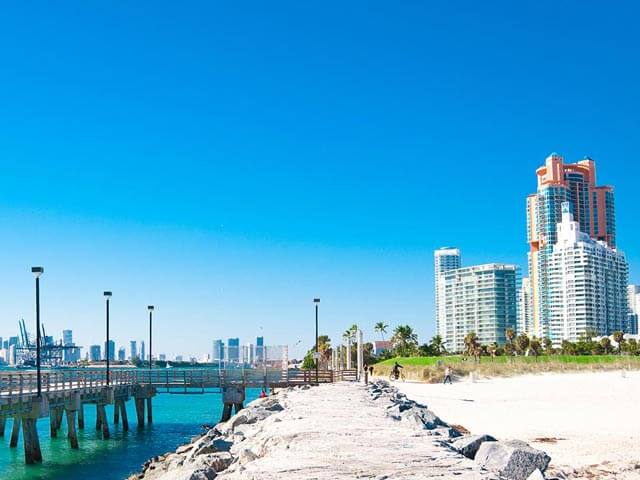 Flying is a very popular method of transportation for visiting Miami. The city's main airport is Miami International, but Fort Lauderdale-Hollywood International Airport is also an option for tourists looking for flights to Miami. Both airports have convenient transport links into Miami itself.

How can I find cheap flights to Miami on eDreams?
At eDreams you will find flights from $49 to Miami. Thanks to the combination of various technologies, machine learning algorithms and real user searches on our platform, you will be able to choose between the different options that best suit your needs when you have to fly to Miami.
✈️ Which airlines fly to Miami?
Airlines flying direct from the US to Miami include:
Airlines with indirect flights to Miami include:
🕑 How long before a flight to Miami should I be at the airport?
If you want to be on time for your flight to Miami, you should get to the airport at least two to three hours in advance. Check-ins, security controls, customs, and boarding the airplane can take some time. At eDreams, you can find the best deals for flights to Miami departing from over 424 cities and choose from a variety of services that will improve your time at the airport and guarantee a much better travel experience, such as priority boarding and additional luggage. For more convenience, when booking your flight to Miami with eDreams you can also add insurance or opt for a refundable fare and have a problem-free trip!
✈️ What is the name of Miami’s airport?
Miami is served by 9 airport[s]. Miami International Airport operates flights towards both domestic and international destinations within 424 cities, such as San Juan, Atlanta and New York, the most popular routes.
📌 How far is Miami’s airport from the city centre?
Miami’s airport Miami International Airport is located 6 miles from the city centre.
💶 How much is the trip from the airport to Miami’s city centre?
Public transport: The price for the trip is about 2.50 USD per person.
Taxi: If you have more budget and prefer to take a taxi from Miami International Airport , the average price for the ride to Miami centre is around 3.50 USD per km.
Car: For more convenience and freedom during your stay, eDreams has the best offers of car rentals in Miami. Pick your preferred car type and get from Miami International Airport to Miami city centre on your own terms.
⛅ What is the weather like in Miami?
If you're looking for summer vibes, the best time to travel to Miami is in July, April and May, when the average temperature reaches 31.57 °C, while March, April and February are the 3 sunniest months of the year, with an average of 52.67 hours. However, if you prefer colder temperatures, make sure you visit Miami during January, February or July to experience an average of 15.14 °C. For those who don't care too much about temperatures, but want to avoid getting wet in the rain, it's important to avoid travelling during February, March and May, when the average precipitation in Miami is 9 mm, while the months of January, February and March are drier, with an average of 0 mm.