One of the most ancient cities in the western world, Athens has come to be regarded as one of the most exciting tourist destinations in Europe. Combining an exceptional array of classical historical sites, a beautiful climate and a friendly, relaxed local atmosphere, it is little wonder that so many people flock from around the globe each year to visit. Pick your way through the noble monuments of Classical Greece, climb to the top of dusty hilltops for a spectacular view of the city or simply relax in any of the city's fantastic cafes and restaurants and get a taste of life in this true melting pot of Mediterranean culture. Discover here the best offers for Flight + Hotel to Athens.

There is so much to do in Athens that much of it will come down to the individual traveller. Possessing the finest classical architecture in the world, travellers can explore Acropolis that domiantes the skyline of the city and contains the Parthenon, considered one of the finest works of architecture in the western world. After flights to Athens, travellers can relax in the excellent local hotels and restaurants and sample the local cuisine, which combines elements of Mediterranean and Balkan cuisine. Greek art spans a period of over 3,000 years, and there are a fantastic variety of museums and galleries for those interested, as well as many pubs and nightclubs for those just looking for a good time.

When in Athens be sure to: 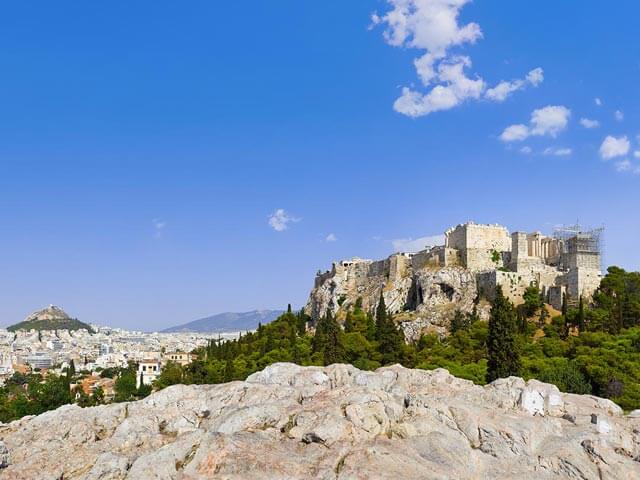 The city is served by Athens International Airport. It is the busiest airport in Greece serving approximately 20 million passengers per year. Aside from international flights, it is often used by tourists to quickly navigate Greece's complex network of islands.

How can I find cheap flights to Athens on eDreams?
At eDreams you will find flights from $91 to Athens. Thanks to the combination of various technologies, machine learning algorithms and real user searches on our platform, you will be able to choose between the different options that best suit your needs when you have to fly to Athens.
✈️ Which airlines fly to Athens?
Airlines flying direct from the US to Athens include:
Airlines with indirect flights to Athens include:
🕑 How long before a flight to Athens should I be at the airport?
If you want to be on time for your flight to Athens, you should get to the airport at least two to three hours in advance. Check-ins, security controls, customs, and boarding the airplane can take some time. At eDreams, you can find the best deals for flights to Athens departing from over 241 cities and choose from a variety of services that will improve your time at the airport and guarantee a much better travel experience, such as priority boarding and additional luggage. For more convenience, when booking your flight to Athens with eDreams you can also add insurance or opt for a refundable fare and have a problem-free trip!
✈️ What is the name of Athens’s airport?
Athens is served by 1 airport[s]. E. Venizelos operates flights towards both domestic and international destinations within 241 cities, such as Santorini, Mykonos and Chania, the most popular routes.
📌 How far is Athens’s airport from the city centre?
Athens’s airport E. Venizelos is located 12 miles from the city centre.
💶 How much is the trip from the airport to Athens’s city centre?
Public transport: The price for the trip is about 1.20 USD per person.
Taxi: If you have more budget and prefer to take a taxi from E. Venizelos , the average price for the ride to Athens centre is around 3.51 USD per km.
Car: For more convenience and freedom during your stay, eDreams has the best offers of car rentals in Athens. Pick your preferred car type and get from E. Venizelos to Athens city centre on your own terms.
⛅ What is the weather like in Athens?
If you're looking for summer vibes, the best time to travel to Athens is in June, July and August, when the average temperature reaches 27.02 °C, while August, July and June are the 3 sunniest months of the year, with an average of 155.27 hours. However, if you prefer colder temperatures, make sure you visit Athens during January, December or February to experience an average of 9.71 °C. For those who don't care too much about temperatures, but want to avoid getting wet in the rain, it's important to avoid travelling during July, February and March, when the average precipitation in Athens is 7.33 mm, while the months of January, February and March are drier, with an average of 0 mm.