As cosmopolitan and diverse as it is rooted in its own history, Rome is one of the premier tourist destinations in the world. Featuring some of the best restaurants on the continent, superb bars and clubs and some of the most iconic historic sites in Europe, the city is widely regarded as one of the most exciting and dynamic places to visit anywhere. The center of the Renaissance, the city houses some of the most famous works of art in the world and remains an important cultural hub to this day. Famous for art, fashion, it's delicious local cuisine, and superbly preserved monuments, Rome truly offers something for everyone. Discover here the best offers for Flight + Hotel to Rome.

When disembarking, the first thing that can prove pleasantly challenging is deciding on what to do first! An exceptional array of hotels and inns are available to any weary traveler, as are a superb range of restaurants and bars for those wanting to relax surrounded by the hustle and bustle of Rome in the evening. You can spend the day walking streets steeped in history, visiting galleries that contain works by Caravaggio and Michelangelo or exploring the awe-inspiring Colosseum. The city contains many beautifully maintained parks and gardens, as well as a vast collection of beautiful churches and cathedrals, ensuring that a trip to Rome will be a memorable experience for anyone.

Things to do when taking flights to Rome include: 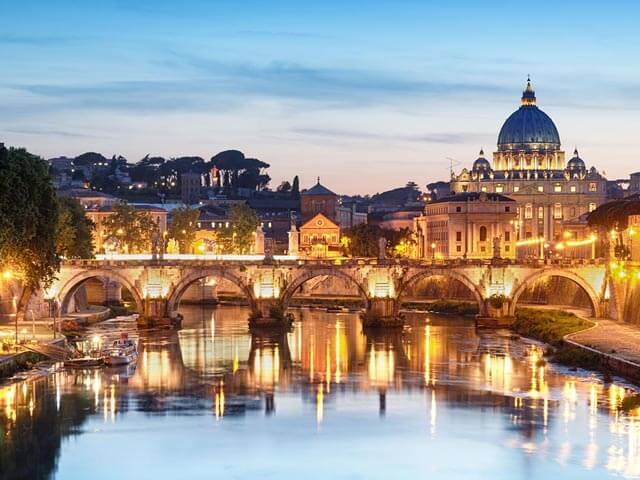 Rome is served by two airports, the Leonardo da Vinci-Fiumicino Airport and the far smaller Ciampino–G. B. Pastine International Airport.

How can I find cheap flights to Rome on eDreams?
At eDreams you will find flights from $63 to Rome. Thanks to the combination of various technologies, machine learning algorithms and real user searches on our platform, you will be able to choose between the different options that best suit your needs when you have to fly to Rome.
✈️ Which airlines fly to Rome?
Airlines flying direct from the US to Rome include:
Airlines with indirect flights to Rome include:
🕑 How long before a flight to Rome should I be at the airport?
If you want to be on time for your flight to Rome, you should get to the airport at least two to three hours in advance. Check-ins, security controls, customs, and boarding the airplane can take some time. At eDreams, you can find the best deals for flights to Rome departing from over 285 cities and choose from a variety of services that will improve your time at the airport and guarantee a much better travel experience, such as priority boarding and additional luggage. For more convenience, when booking your flight to Rome with eDreams you can also add insurance or opt for a refundable fare and have a problem-free trip!
✈️ What is the name of Rome’s airport?
Rome is served by 2 airport[s]. Fiumicino operates flights towards both domestic and international destinations within 285 cities, such as Madrid, Paris and Tel Aviv, the most popular routes.
📌 How far is Rome’s airport from the city centre?
Rome’s airport Fiumicino is located 14 miles from the city centre.
💶 How much is the trip from the airport to Rome’s city centre?
Public transport: The price for the trip is about 1.50 USD per person.
Taxi: If you have more budget and prefer to take a taxi from Fiumicino , the average price for the ride to Rome centre is around 4.26 USD per km.
Car: For more convenience and freedom during your stay, eDreams has the best offers of car rentals in Rome. Pick your preferred car type and get from Fiumicino to Rome city centre on your own terms.
⛅ What is the weather like in Rome?
If you're looking for summer vibes, the best time to travel to Rome is in July, August and June, when the average temperature reaches 25.29 °C, while July, August and June are the 3 sunniest months of the year, with an average of 163.7 hours. However, if you prefer colder temperatures, make sure you visit Rome during January, February or December to experience an average of 5.97 °C. For those who don't care too much about temperatures, but want to avoid getting wet in the rain, it's important to avoid travelling during March, May and November, when the average precipitation in Rome is 9 mm, while the months of January, February and March are drier, with an average of 0 mm.