Los Angeles, also known as the City of Angels, is one of the world's premier travel destinations. Not only is it America's second-largest city and a cultural melting pot, it's also the home of Hollywood – a name synonymous with glamour. The city is a must for film fans but Los Angeles attractions go way beyond its links to the silver screen. There is also a lot to do and see for shopaholics, beach lovers, and culture vultures, with some of the world's best shops, beaches, museums and galleries. Los Angeles also has some excellent food to fuel all the sightseeing. From good ol' American grub via Latin flavors to authentic Asian cuisine, you're spoiled for choices when it comes to food in LA. Discover here the best offers for Flight + Hotel to Los Angeles.

Anyone booking flights to Los Angeles has plenty of options for what to do once they get there. The list of attractions in Los Angeles is almost endless. Nearly everyone who visits LA tends to immerse themselves in the city's film history. Hollywood has long been a mecca for glitz, glamour and stars, but that's just the start. Visitors also have superb options for dining, culture, shopping, sports and outdoors fun.

Things you definitely shouldn't miss in LA include: 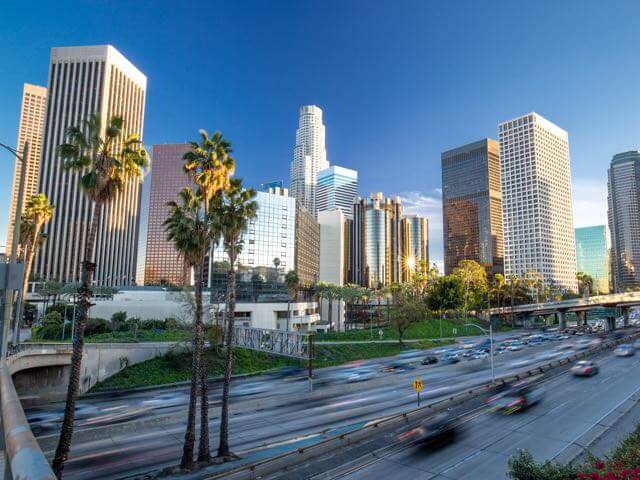 Tourists looking for flights to Los Angeles have a couple of options open to them. International visitors have the choice of LAX, LA/Ontario International Airport or John Wayne Airport. If they're lucky, they may even find some cheap flights to LAX at the last minute.

How can I find cheap flights to Los Angeles on eDreams?
At eDreams you will find flights from $55 to Los Angeles. Thanks to the combination of various technologies, machine learning algorithms and real user searches on our platform, you will be able to choose between the different options that best suit your needs when you have to fly to Los Angeles.
✈️ Which airlines fly to Los Angeles?
Airlines flying direct from the US to Los Angeles include:
Airlines with indirect flights to Los Angeles include:
🕑 How long before a flight to Los Angeles should I be at the airport?
If you want to be on time for your flight to Los Angeles, you should get to the airport at least two to three hours in advance. Check-ins, security controls, customs, and boarding the airplane can take some time. At eDreams, you can find the best deals for flights to Los Angeles departing from over 476 cities and choose from a variety of services that will improve your time at the airport and guarantee a much better travel experience, such as priority boarding and additional luggage. For more convenience, when booking your flight to Los Angeles with eDreams you can also add insurance or opt for a refundable fare and have a problem-free trip!
✈️ What is the name of Los Angeles’s airport?
Los Angeles is served by 9 airport[s]. Los Angeles Intl Airport operates flights towards both domestic and international destinations within 476 cities, such as Las Vegas, Dallas and Newark - Nj, the most popular routes.
📌 How far is Los Angeles’s airport from the city centre?
Los Angeles’s airport Los Angeles Intl Airport is located 12 miles from the city centre.
💶 How much is the trip from the airport to Los Angeles’s city centre?
Public transport: The price for the trip is about 1.75 USD per person.
Taxi: If you have more budget and prefer to take a taxi from Los Angeles Intl Airport , the average price for the ride to Los Angeles centre is around 4.00 USD per km.
Car: For more convenience and freedom during your stay, eDreams has the best offers of car rentals in Los Angeles. Pick your preferred car type and get from Los Angeles Intl Airport to Los Angeles city centre on your own terms.
⛅ What is the weather like in Los Angeles?
If you're looking for summer vibes, the best time to travel to Los Angeles is in July, August and September, when the average temperature reaches 30.91 °C, while August, July and September are the 3 sunniest months of the year, with an average of 187.19 hours. However, if you prefer colder temperatures, make sure you visit Los Angeles during January, February or December to experience an average of 7.16 °C. For those who don't care too much about temperatures, but want to avoid getting wet in the rain, it's important to avoid travelling during June, April and May, when the average precipitation in Los Angeles is 6.58 mm, while the months of January, February and March are drier, with an average of 0 mm.