Located deep within the Mexican heartland, Mexico City is a historic city experiencing a modern renaissance. Really three cities in one, Pre-Hispanic ruins cover the city, as do stunning examples of colonial era architecture, while the city still remains a modern, bustling metropolis, turning it into a true melting pot of Central American cultures. Visitors can discover the dazzling culture of Central America with numerous festivals and carnivals throughout the year as well as a spectacular nightlife. There is also a thriving culinary scene in the city, with both traditional Central American and European flavors coming together to create what is for many the gastronomic capital of the region. Discover here the best offers for Flight + Hotel to Mexico.

After arriving, travellers will be able to rest their weary heads at any of a number of fine hotels. The city has restaurants enough to cater for any budget, be it fine dining at a award winning restaurant or street food vendors serving piping hot tortillas or rice dishes. Festivals, sports fields and street performers are dotted throughout the city, which, together with the outstanding bars and eclectic nightlife, give the appearance of a city that never sleeps or stops having fun. If at any time, it becomes overwhelming, you can relax with a panoply of slower paced attractions, including the Museo Nacional de Arte or the National Museum of Anthropology, ensuring that Mexico City truly does have something for every traveller.

When in Mexico City be sure to: 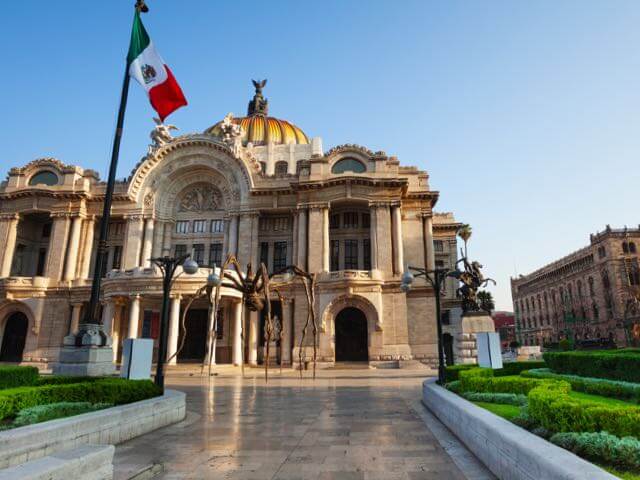 The city is served by Mexico City International Airport, the second busiest airport in Latin America. It has recently experienced a vast amount of investment to meet the demands that increased tourism has placed upon it and is one of the best equipped airports in the region.

How can I find cheap flights to Mexico City on eDreams?
At eDreams you will find flights from $98 to Mexico City. Thanks to the combination of various technologies, machine learning algorithms and real user searches on our platform, you will be able to choose between the different options that best suit your needs when you have to fly to Mexico City.
✈️ Which airlines fly to Mexico City?
Airlines flying direct from the US to Mexico City include:
Airlines with indirect flights to Mexico City include:
🕑 How long before a flight to Mexico City should I be at the airport?
If you want to be on time for your flight to Mexico City, you should get to the airport at least two to three hours in advance. Check-ins, security controls, customs, and boarding the airplane can take some time. At eDreams, you can find the best deals for flights to Mexico City departing from over 259 cities and choose from a variety of services that will improve your time at the airport and guarantee a much better travel experience, such as priority boarding and additional luggage. For more convenience, when booking your flight to Mexico City with eDreams you can also add insurance or opt for a refundable fare and have a problem-free trip!
✈️ What is the name of Mexico City’s airport?
Mexico City is served by 3 airport[s]. Juarez Intl Airport operates flights towards both domestic and international destinations within 259 cities, such as Tijuana, Puerto Escondido and Cancun, the most popular routes.
📌 How far is Mexico City’s airport from the city centre?
Mexico City’s airport Juarez Intl Airport is located 4 miles from the city centre.
💶 How much is the trip from the airport to Mexico City’s city centre?
Public transport: The price for the trip is about 0.30 USD per person.
Taxi: If you have more budget and prefer to take a taxi from Juarez Intl Airport , the average price for the ride to Mexico City centre is around 1.00 USD per km.
Car: For more convenience and freedom during your stay, eDreams has the best offers of car rentals in Mexico City. Pick your preferred car type and get from Juarez Intl Airport to Mexico City city centre on your own terms.
⛅ What is the weather like in Mexico City?
If you're looking for summer vibes, the best time to travel to Mexico City is in April, May and February, when the average temperature reaches 26.84 °C, while February, March and January are the 3 sunniest months of the year, with an average of 80.65 hours. However, if you prefer colder temperatures, make sure you visit Mexico City during January, February or December to experience an average of 4.54 °C. For those who don't care too much about temperatures, but want to avoid getting wet in the rain, it's important to avoid travelling during January, February and April, when the average precipitation in Mexico City is 6.23 mm, while the months of January, February and March are drier, with an average of 0 mm.