The Caribbean island of Aruba is a constituent country of the Netherlands known for its fantastic beaches, stunning landscape and lively atmosphere. The island attracts many tourists every year, who come for the sand, sea and scenery. The year-round good weather makes it popular as a winter getaway and it's not hard to understand why someone would want to spend their holidays relaxing on the island's golden beaches. As if sunshine and sandy beaches weren't attractive enough, excellent food and drink outlets can be added to the list of many reasons to book flights to Aruba. The island is also home to exotic wildlife, making it ideal for those who enjoy hiking and/or snorkeling during their vacations. Discover here the best offers for Flight + Hotel to Aruba.

Most visitors to Aruba head straight to the island's beautiful white beaches. Lying in the warm sand and swimming in the crystal clear water won't get old any time soon. But if it ever does, or if visitors feel like being a little more active, there are plenty of activities to take part in and sites to see. Snorkeling and scuba diving are perennially popular, for example. Aruba's rugged areas are also perfect for the adventurous tourist to explore either on foot or in a 4x4 vehicle.

When visiting Aruba, be sure to: 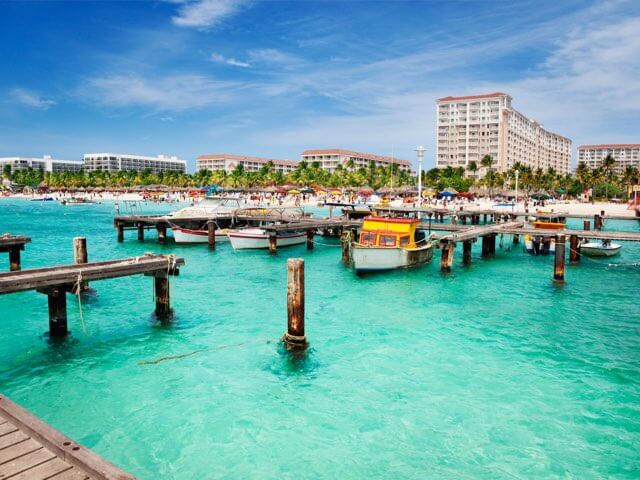 Aruba's single airport is Queen Beatrix International Airport, also known as Aeropuerto Internacional Reina Beatrix, in the island's west. The airport is named after the Netherlands' former queen. Flights to Aruba land from all over the world, including the US and Europe.

How can I find cheap flights to Aruba on eDreams?
At eDreams you will find flights from $331 to Aruba. Thanks to the combination of various technologies, machine learning algorithms and real user searches on our platform, you will be able to choose between the different options that best suit your needs when you have to fly to Aruba.
✈️ Which airlines fly to Aruba?
Airlines flying direct from the US to Aruba include:
Airlines with indirect flights to Aruba include:
🕑 How long before a flight to Aruba should I be at the airport?
If you want to be on time for your flight to Aruba, you should get to the airport at least two to three hours in advance. Check-ins, security controls, customs, and boarding the airplane can take some time. At eDreams, you can find the best deals for flights to Aruba departing from over 29 cities and choose from a variety of services that will improve your time at the airport and guarantee a much better travel experience, such as priority boarding and additional luggage. For more convenience, when booking your flight to Aruba with eDreams you can also add insurance or opt for a refundable fare and have a problem-free trip!
✈️ What is the name of Aruba’s airport?
Aruba is served by 1 airport[s]. Reina Beatrix operates flights towards both domestic and international destinations within 29 cities, such as Willemstad Curacao Island, Medellin and Fort Lauderdale, FL, the most popular routes.
📌 How far is Aruba’s airport from the city centre?
Aruba’s airport Reina Beatrix is located 4 miles from the city centre.
💶 How much is the trip from the airport to Aruba’s city centre?
Public transport: The price for the trip is about 2.75 USD per person.
Taxi: If you have more budget and prefer to take a taxi from Reina Beatrix , the average price for the ride to Aruba centre is around 9.72 USD per km.
Car: For more convenience and freedom during your stay, eDreams has the best offers of car rentals in Aruba. Pick your preferred car type and get from Reina Beatrix to Aruba city centre on your own terms.
⛅ What is the weather like in Aruba?
If you're looking for summer vibes, the best time to travel to Aruba is in August, June and September, when the average temperature reaches 32.51 °C, while March, April and September are the 3 sunniest months of the year, with an average of 25.89 hours. However, if you prefer colder temperatures, make sure you visit Aruba during January, February or March to experience an average of 24.62 °C. For those who don't care too much about temperatures, but want to avoid getting wet in the rain, it's important to avoid travelling during March, May and January, when the average precipitation in Aruba is 3.4 mm, while the months of January, February and March are drier, with an average of 0 mm.