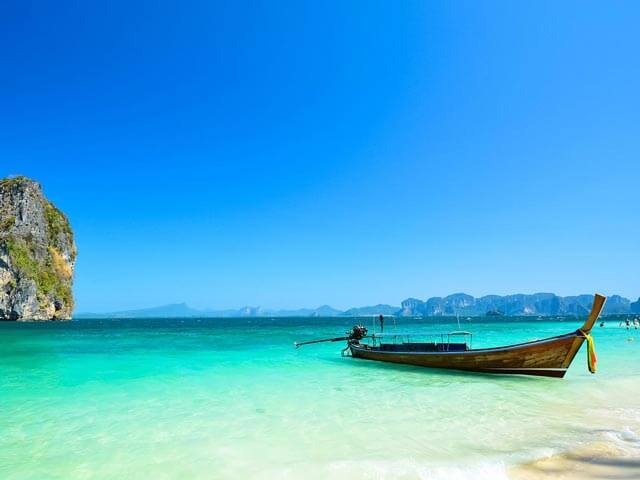 Destination paradise - A vacation in Phuket

Phuket is an island province of Thailand located off the country’s west coast in the Andaman Sea. It comprises Phuket Island and over 30 nearby smaller islands. Phuket Island is Thailand’s largest island and a major tourist destination. It’s connected to the mainland by the Sarasin Bridge, but due to the island's large size, it also has an airport handling domestic and international flights. The island is mountainous and forested in central parts and is world famous thanks to its many first-class beaches. It’s a terrific place to visit, and at eDreams, we invite you to check out our excellent travel packages to Phuket.

Things to know before visiting Phuket

Thanks to Thailand’s visa exemption scheme for select countries, US citizens with standard (non-diplomatic) passports don’t need to have a visa in order to enter Thailand, so you can enjoy a vacation in Phuket for a period of up to 30 days. If you need longer than that, apply for a two-month tourist visa from your nearest Thai consulate.

Before booking your flight to Phuket, check that your passport will be valid for at least six months. You also need to make sure that it still has two or more blank pages for entry and exit stamps. No vaccinations are required, but if you suffer from any medical condition that needs treatment with prescription drugs, you should first check with the Thai embassy or consulate to know whether you’re allowed to bring them into Thailand.

What is the weather in Phuket?

Thailand is a tropical country. Average temperatures in Phuket range from around 76°F to 90°F throughout the year, so it never gets cold. Due to its tropical location, Phuket has a rainy season that peaks in September, but even then, there’s still plenty of sunshine. Sea temperatures are also invitingly warm all year round. Enjoy the island’s great weather to the full with our excellent flight and hotel package in Phuket. You can take a flight from New York to Phuket or a flight from Los Angeles to Phuket.

What to do in Phuket?

Phuket is world famous for its fantastic beaches. Patong Beach is the best known and most developed beach on the island. It’s over two miles long, and in addition to having fine quality sand, it also offers snorkeling, scuba diving, kayaking, kite surfing and much more. Patong Beach is also known for its vibrant nightlife, and there are countless bars and restaurants serving tourists and locals well into the night.

The best beaches are on the west side of the island and other popular beaches on Phuket’s west coast include Karon Beach, Kata Beach and Nai Harn Beach. There’s a lot to see and do away from the beaches, too, in the adjoining beach towns. You can watch live Muay Thai (Thai boxing), play golf, have a Thai massage, race around a go-kart track at breakneck speed, and much more. Phuket has it all, and you can experience many of its attractions at your leisure with our excellent flight and hotel package in Phuket.

What to visit around Phuket?

There are many boat and speed boat trips available for day tours of some nearby interesting places, including Phang Nga Bay, which contains the island Khao Phing Kan. This island is also known as James Bond Island. It was a location for the Bond movie ‘The man with the Golden Gun’ which featured the awesome, towering limestone formation called Ko Tapu rising out of the sea. Other one-day boat trips out of Phuket that you can take include tours of the Phi Phi Islands and the Similan Islands.

What to eat in Phuket?

Thailand’s cuisine is delicious wherever you go in the country, and Phuket is certainly no exception. As it’s an island, you can expect fresh fish and seafood dishes to feature strongly in restaurant menus. That's in addition to national Thai dishes and street food such as phad thai, a stir-fried noodle dish, and tom yum goong, a deliciously flavored sour soup with prawns, and many fried rice or noodle dishes. Phuket has had a strong Malay and Chinese influence over many generations, so there’s a huge variety of dishes available that originated in China and Malaysia such as the fried noodle dish Hokkien Mee and the Malay influenced, sweet pancake, Ah Po. Western food is also available in many restaurants and snack bars. Enjoy a vacation in Phuket and experience the sights, sounds, and - last but not least - the delicious cuisine of Phuket.