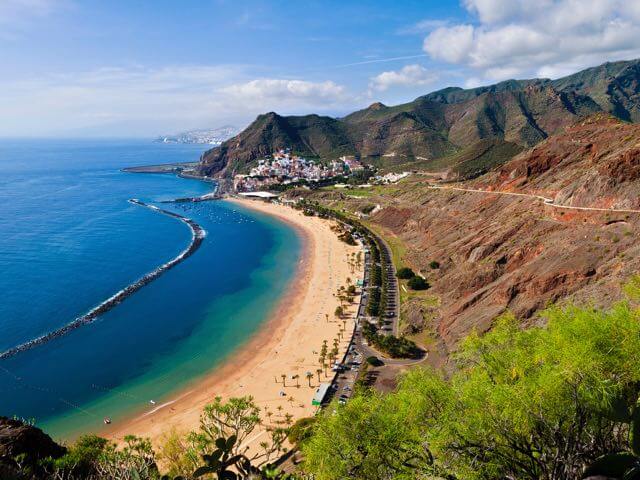 Tenerife is the largest and most developed of the Canary Islands and is very popular for short breaks and longer vacations. Sunshine all year round, superb beaches and dramatic landscapes make Tenerife the ideal destination for your next escape; with lively resorts, ancient towns and tranquil havens, Tenerife offers something to suit every taste. You’ll find a range of exciting attractions and a vast choice of accommodation, ranging from budget apartments to high-end villas and hotels. Book your flight to Tenerife today, and let your sunshine vacation begin!

Things to know before visiting Tenerife

The island of Tenerife is volcanic and Mount Teide, the highest peak in Spain, at over 12000 feet, towers majestically over the heart of the island. Even when the beaches and resorts are basking in warm sunshine, the heights of Mount Teide may be dusted with snow. The volcano has erupted many times, most recently in 1909. As well as the spectacular peak itself, the Mount Teide National Park offers pine forests and a rugged lava landscape. Thanks to the island’s volcanic geology, many beaches are formed from black sand that contrasts spectacularly with the turquoise waters: however, the larger resorts boast beaches of imported golden sand. Tenerife is perfect for an active holiday, with hiking, golf, watersports, horse riding, tennis, and cycling on offer all year round. Whatever your plans for your vacation in Tenerife, get there in style with eDreams.

What is the weather in Tenerife?

Tenerife is blessed with a pleasant subtropical climate. Summer is dry and hot with only a few light rain showers: temperatures are perfect for sun seekers, peaking at around 28 degrees in July and August. During the autumn months, temperatures fall back a little to around 27 in October and 25 in November; showers tend to be a little more frequent during the autumn and winter. In winter, temperatures fall to a mild 20 (14 at night. Overall the north of the island has a little more rainfall and is, therefore, the more verdant area. Whatever your plans, vacation getaways in Tenerife are appealing at any time of the year, so find your ideal flight from New York to Tenerife right away!

Things to do in Tenerife

There’s so much to see and do in Tenerife you’ll be spoilt for choice. If you want to get closer to nature, go hiking in the Masca Valley or take a boat ride from Los Cristianos to spot some whales and dolphins. A visit to the charming old town of La Orotava gives a flavor of days gone by, with cobbled streets, historic mansions and verdant botanical gardens. For a fun day out, the vast Loro Parque zoo and the Siam water park are not to be missed. When you’ve had enough beach life, a visit to the capital Santa Cruz with its old buildings, museums and excellent shopping is not to be missed. Party the night away in Playa de Las Americas, renowned for its buzzing nightlife with an array of restaurants, clubs and dinner shows. When planning your all inclusive Tenerife trip, don’t forget to check out our best deals for hotels and a flight from Los Angeles to Tenerife.

What to eat in Tenerife?

Food in Tenerife tends to be simple and delicious, with plain grilled meat or fish served with fries found on most restaurant menus. Look out for battered fish served with aioli (garlic mayonnaise). Tapas are not traditional to the Canaries but this way of eating is becoming a very popular choice, with traditional Canarian dishes such as papas arrugadas (local varieties of potatoes boiled in their skins in very salty water) and pimientos de Padron taking their place alongside chopitos (tiny squid) and queso asado (fried goat’s cheese). This cheese is particularly delicious when accompanied by the local palm “honey” which is not really honey but is made from palm tree sap. Eating out here is generally very good value and by saving money on your cheap vacation deal in Tenerife, you’ll be able to treat yourself.

What to bring from Tenerife?

Shoppers flock to Tenerife to take advantage of its tax status which is more favourable than in mainland Spain. Electronic goods, cameras, cell phones and perfume are popular purchases. Alcohol, such as the local banana liqueur, and tobacco are also cheap and you can get some great deals on designer brand shoes and clothing. Souvenir hunters should look out for traditional bird song whistles, goatskin bottles and jewellery made from peridot, a light green semi-precious stone that is naturally formed from lava. Delicious Tenerife honey, such as avocado honey and orange honey, is available in decorative jars that are perfect for gifts. While planning your shopping trip, use eDreams for the best vacation package deals and make your money go further!