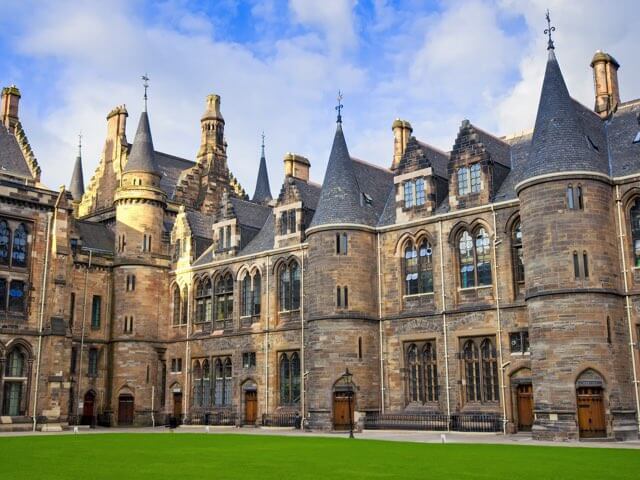 Glasgow, situated near the west coast of Scotland, is the country’s largest city and one of the principal cities of the UK. Its long history, well-developed infrastructure and impressive visitor attractions have made Glasgow a major tourist destination. Now it's a modern city focused on financial services, bio-sciences, retail and tourism. It's a great city to visit, and at eDreams, we're pleased to offer you our excellent flight and hotel package for Glasgow, so you can experience its countless charms first-hand.

Things to know before visiting glasgow

US citizens can enter the United Kingdom without a visa for up to 90 days. Before your flight to Glasgow, make sure your passport is valid for the duration of your stay and has at least one blank page for entry and exit stamps. With a full US driver’s license, you can rent a car in Glasgow, too, and drive anywhere in Britain. Unlike in the US and most of Europe, driving is on the left.

British currency is pounds sterling (GBP) issued by the Bank of England, but banknotes issued by Scottish banks are common throughout Scotland, too, and may be included in cash withdrawn from ATMs or given in change by sellers. These are completely legal in Scotland, but can’t be exchanged back home for US dollars. Keep in mind, too, When booking our flight and hotel packages, you can arrange a flight from New York to Glasgow or a flight from Los Angeles to Glasgow.

What is the weather in Glasgow?

Glasgow’s climate is ‘oceanic’. Thanks to the Gulf Stream skirting the west coast of Scotland, Glasgow has mild winters compared to other northern European cities such as Moscow or Copenhagen. Average temperatures range from around 35°F in January to 68°F in July, but can often exceed either extreme. Choose when you want to vacation in Glasgow, and bring a selection of cool and warm clothing for everyday comfort.

What to do in Glasgow?

Glasgow has excellent visitor attractions. The Kelvingrove Art Gallery and Museum in the ‘West End’ is just one of several world-class museums and galleries in the city. Glasgow is also known for great music. Whether your tastes run to classical concerts performed at the Glasgow Royal Concert Hall, rock music by major acts at King Tut’s Wah Wah Hut, or unknown pub bands, your musical needs will be well served in Glasgow. Check out our flight and hotel packages for Glasgow and enjoy the music, the nightlife, leisure and shopping centers and much more.

What to visit around Glasgow?

Glasgow is well placed for visiting other interesting places in Scotland, and even England isn’t too far away for a day trip. Edinburgh, the capital city, is only 40 miles east and can easily be reached by train, bus or car in under an hour. Edinburgh Castle dominates its skyline and welcomes visitors eager to feel part of its great medieval history. A 30-mile trip north from Glasgow takes you to the town of Balloch and the southern banks of Loch Lomond, one of Scotland’s most famous lakes. This is the start of the Scottish Highlands and the scenery is spectacular.

In the opposite direction, a 100 mile drive south on the M74 and M6 motorways (freeways) takes you across the border to England, where you can enjoy the picturesque scenery of the Lake District National Park. As England is also part of the UK, no border formalities are required when traveling from Scotland to England. All of these destinations and many more can be reached by buses based at Glasgow’s Buchanan Street Bus Station during your vacation in Glasgow. For train travel, Glasgow Central Station and Glasgow Queen Street are the main stations for inter-city journeys.

What to eat in Glasgow?

Traditional Scottish favorites available in Glasgow include fish and chips, haggis, neeps and tatties (turnip and potatoes), Scotch broth and the deliciously festive suet and cinnamon-based clootie dumpling. Glasgow’s proud reputation as a top university city has attracted students from all over the world. That, plus its immigrant population, mostly from former British colonies, has led to an incredible variety of international cuisines available in the city. If you want exotic food, from India, China, Malaysia, Mexico, Turkey or Thailand, to name just a few, you’ll find no shortage of restaurants and fast food outlets able to satisfy your desires. The same is true for alcoholic refreshments. In addition to the usual imported wines and liquor that you’d find in any city, Scotch is available in a wide variety of local brands, and locally brewed Scottish beers are also very popular. Check out Glasgow's delicacies yourself with our acclaimed flight and hotel packages to Glasgow.