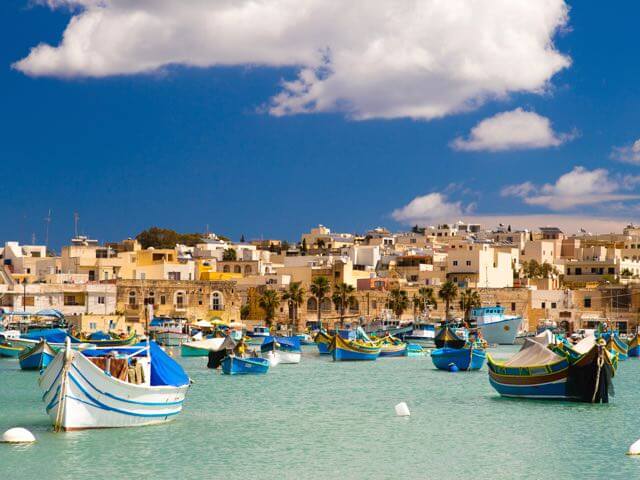 Located in the center of the Mediterranean Sea, situated between Sicily and the North African coast, Malta is the smallest member state of the European Union. In fact, it only covers a total of 122 square miles. A former British colony, vacation packages to Malta are popular with many American tourists because English is widely spoken on the island. Flights from New York to Malta are run by several European airlines as well as US ones. Like flights from Los Angeles to Malta, most services are not direct but this affords travelers the opportunity to combine their vacation to Malta with a stop in another European city, such as Rome, London or Frankfurt. The island of Malta has been claimed by the ancient Greeks, the Phoenicians, and the Romans in the past. It became its own country in 1964 when independence from the British was achieved. The country's Independence Day is celebrated on 21st September every year. Why not book your next getaway to a wonderful island in the heart of the Mediterranean?

What is the weather in Malta?

With mild winters and hot summers, vacation getaways to Malta are highly recommended at any time of year. July and August are the two hottest months with average daily highs that get to about 89 °F. There is little rainfall on the island during the summer and when it does rain, it tends to be a passing shower which will not spoil your enjoyment of taking a vacation in Malta. January and February are the coolest months of the year to visit. However, travelers will not find it cold at this time of year because the average low is still a reasonable 49 °F during these months. In terms of sunshine duration, Malta enjoys over 3,000 hours of good weather each year making it one of the sunniest places to visit in all of Europe. Book your flight to Malta and sun yourself in style.

Things to do in Malta

Many vacation deals to Malta are improved by taking part in an activity or two. Because it is an island, travelers often take part in water-based fun, such as taking a Scuba diving course. These are run from various locations around the coast and booking one is simple. Sailing charters are also possible from many independent operators. Don't worry if you have never taken the helm of a yacht before because lessons in the basics of sailing are also commonplace on the island. Adventurous travel packages to Malta should also include a go on a flyboard. This exhilarating water sport is taking off among locals and visitors alike. Using one means that you can shoot several yards up into the air from gushing jets that are attached to a device that is strapped to your feet. If all that sounds too energetic, then sitting back and relaxing on one of Malta's many beaches is a perfectly acceptable alternative! Whatever you want to do, book your time in Malta without delay.

What to see in Malta?

Vacations in Malta offer a great many things to see and do. Casa Bernard is a living museum which is located in Rabat, near to Saint Paul’s Church. It is a well-preserved palazzo, or palace, which is still home to a Maltese noble family. Visitors can enjoy the palace's late Renaissance architecture and furnishings. The Old Town of Valetta is another fine tourist sight. This is the capital of Malta and it is a UNESCO World Heritage site with many historic buildings and narrow streets. A trip to the island's famous Blue Grotto should not be missed out on, either - it is a natural wonder and truly breathtaking. If you do face poor weather, then a good idea is to head to Lascaris War Rooms. This is a museum which allows you to explore all of the underground communication tunnels built during World War II to provide protection from bombing campaigns. With so much to see, booking your vacation to Malta should not be put off.

What places to visit near Malta?

Cheap vacation packages can be found all over the island of Malta, but its sister island of Gozo should not be missed during a stay. Officially a part of the Maltese archipelago, Gozo is distinctive from Malta. The main port of Mgarr is the entry point for visitors from Malta and it has been the inspiration for many artists over the years thanks to its beauty. Anyone booking flight and hotel packages to Malta should also consider taking a ferry to nearby Sicily. These depart from the main port in Valetta and arrive in the south of the Italian island, at Pozzallo. Sicily has developed a strong reputation for winemaking in recent years and Pozzallo itself has four different beaches to enjoy as well as some excellent seafood restaurants close to the harbor. Make your reservation to Malta today.

What to eat in Malta?

Many all inclusive vacations to Malta will serve food at the hotel which is designed for an international audience. Regardless of this, a number of traditional Maltese dishes will also be served alongside things that tourists will be familiar with. English, French, Sicilian and North African influences are to be found in Malta's food. Kusksu should be tried when on a vacation in Malta; it is a kind of vegetable soup with the addition of small beads of pasta. Aljotta is a fish soup which is French in style with plenty of garlic, herbs, and tomatoes. Fenek mokli is another dish that locals love and is a fried form of rabbit. As you might expect of an island food culture, seafood features a lot on menus. A particular favorite is octopus stew or octopus served in garlic. Local cheese is usually made from sheep's milk and it is often served as a starter. Why not make Malta your next vacation destination?